Today is the last day of school for my kids.

While we are super excited about summer vacation we are also sad because our school is closing.

We have been lucky enough to spend the last 7 years surrounded by amazing teachers and families that have supported the school community through out the years.

Everyone is sad but also optimistic for the future. Three schools will be amalgamating and forming one large school.

The idea of 600 plus children in one space is overwhelming to all of us. Our school has 200 and some days that seems like too many.

The plus side of this is that the kids will be able to make new friends and will have a state of the art facility. There is always a silver lining.

So today we say goodbye to a school that has stood for 95 years. It was there during the great depression and through World War 2. It has seen families from all walks of life come through it’s doors. It educated our children and was a safe place for all. It supported those that could not afford to feed their families or buy Christmas presents for their kids. It is truly a happy place. It is a community.

Of course you can’t have a school community without teachers. They are the back bone of the school and they deserve a huge thank you for all that they have done for our students and our community.

The best way I know of to say thank you is to bake.

Sugar cookies are an easy and tasty gift to give.

Sugar cookies can be very time consuming. They are easy to make but you have to chill the dough for a long time.

I roll out my dough and chill it for at least 2 hours.

I also chill the dough after cutting out the shapes. Refrigerate for 30 minutes to an hour. If your dough is warm it will spread and that just looks awful!

Next comes the royal icing. I always find it tricky to get the right consistency. Too stiff and you won’t be able to flood the cookies. Too watery and your outline will be running down the sides of your cookie. I found this recipe and it has never failed me.

I based my cookies on the school t-shirts which is a collegiate style M and stars. I got the cookie cutters from cheapcookiecutters.com

A lot of people do the outline and then let the cookie sit for a while before they flood it. That’s not the way I roll. I like a seamless finish and I flood the cookie as soon as the outline is done. 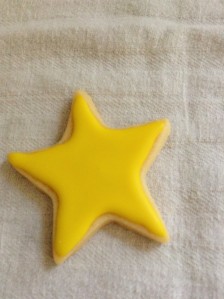 I make sugar cookies for the teachers each year. This year I made them for all the teachers in the school. It was time consuming but so worth it. Everyone loved them. 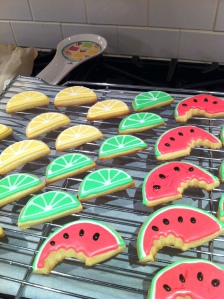 Today is bitter sweet. We say goodbye to an old friend and are getting ready to move forward into a new community with familiar and unfamiliar faces. Change can be daunting but as a good friend told me today, sometimes you need change and a challenge to be the best that you can be. So we will shed our tears and celebrate an amazing place filled with memories that will be cherished for years to come and continue forward on the path that we need to take. 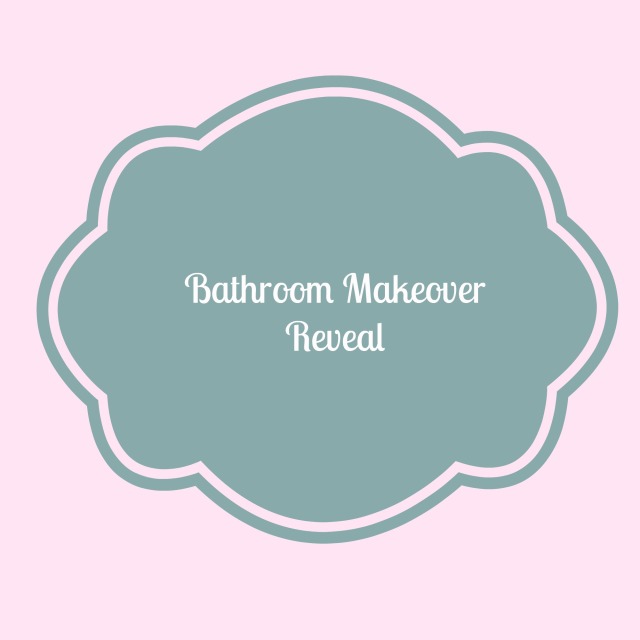 Back in February or March I mentioned that I had the great idea to give our bathroom a face lift.

I had this genius idea at the same time that we were painting our bedroom and finishing off Callum’s room.

Do you ever get in those zones where you start one project and then you feel like adding three more won’t be any extra hassle?

Well it wasn’t so much a hassle to me as it was to Chris.

My job was to clean out the bathroom. As I have mentioned before I am not allowed to touch paint so Chris took care of that.

I am also not allowed to touch sharp objects because I am a tad clumsy so that meant Chris had to put in the floor as well.

The nice thing about not doing the work is that you can take a bunch of pictures.

It was dark because of the large cabinet that blocked out a lot of the light over the vanity. You could barely see when you were in the shower. The paint colour didn’t help either. I would do my make up in the bathroom and afterwards see myself in natural lighting and realize that I had completely over done it or I hadn’t blended things in as well as I thought.

There was a medicine cabinet over the toilet and it was a crowded mess. I’m pretty sure I threw out 90% of what was in there.

The doors on the vanity were uneven and looked awful.

Don’t even get me started on the floors! That tile was terrible!

The last time this bathroom had some TLC was in the 90’s and it showed.

First things first. I had to clean out the cabinets. Turns out I am a bit of a hoarder. I had been hanging on to make up and hair products from 2005. I have no idea why I do this. I use a grand total of 5 products every day and that includes both hair and make up and yet I can not say good bye to the eye lash curler I have never used or the keratin hair straightening kit I bought in 2010 and never opened.

Well all that junk is gone now.

The next step was to start ripping out the cabinets. That was easy. They were relatively light and came apart easily.

The tall cabinet had been glued to the wall. Who glues a cabinet to a wall?! This left behind some torn drywall that Chris had to scrape off and then mud over. 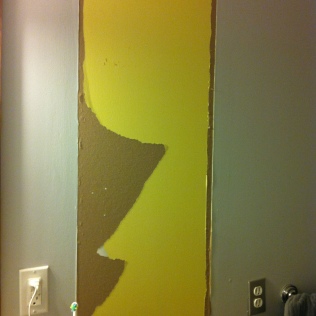 He was not a happy camper.

After the walls were prepped the painting began.

We chose a colour called Ceylon Cream by Behr.

In the store it looked like a light cream but in reality it is more of a light beige. I am still not sure if I like it.

When I told Chris I wasn’t happy with the colour he gave me a look that said “too bad lady you’re stuck with this for years so don’t mention it again.”

When the painting was done Chris started the flooring.

We chose Vinyl planks that looked like hardwood. I have always loved the look of wood floors in the bathroom but it just isn’t practical with kids that still splash so much water out of the tub.

The flooring went down very quickly and was easy to cut even around the tub. We just put it down right over the old tile.

The big challenge was getting the vanity upstairs. 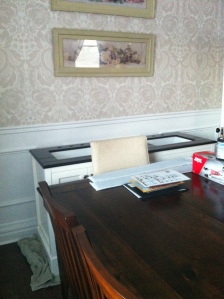 It  had been in our dining room for weeks and just getting it behind the table was a challenge. It weighed about 300 pounds because the granite top had been glued on. We had to ask our super strong Cross fit neighbours to help us.

They lifted it over their heads and moved it up the stairs the same way I would carry a stuffed animal. These people are seriously strong!

Once the vanity was in and all the plumbing had been hooked up it was time to think about mirrors and lighting.

I got the mirrors from Home Sense for $29 each and the lights were from Home Depot.

Over all I am thrilled with how the bathroom turned out.

It is nice and bright in there even without the light on.

I know Chris wasn’t thrilled when I suggested we tackle the bathroom but he did a great job and he is much happier with how it looks.

It was the night before Sofie’s birthday and I was feeling pretty good. Presents had been bought, the cake had been made but something was nagging at me. I had forgotten to do something but I couldn’t figure out what it was.

Then it hit me. I forgot to buy wrapping paper.

We have approximately a million gift bags and miles of tissue paper in our basement but there is something about watching a child tear into a gift on their birthday that is so fun. Not to mention that no child likes to have to be careful with the tissue paper and bag so their mom can save it later.

After searching and searching I discovered the only wrapping paper we had in the house was covered in snow men and Santa Claus. That was not going to cut it.

I was just about to grab my keys and drag Callum to the store with me when I spied a lone roll of craft paper hiding in the corner of my office.

I grabbed some paint, taped down the paper to the counter, and Callum and I got to work

Surprisingly Callum was not sold on this idea. Every time I told him painting his hands would be fun he would say “I’m not taking what you are try to sell me” I think he was trying to use the line “I’m not buying what you’re selling”.

Regardless of how he felt I slapped some paint on his hands anyway and we started making handprints on the paper. 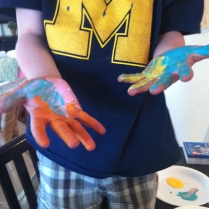 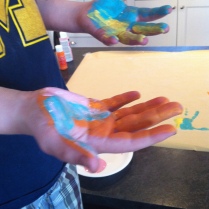 He really got into it once I said he could paint my hands.

The whole project took 3 minutes and about 20 minutes of drying time.

Sofie loved her gifts and her wrapping paper.

I must admit for a last minute idea it turned out super cute!

She is funny, smart, probably the most caring person I know, and absolutely gorgeous

This amazing person is my baby girl Sofie 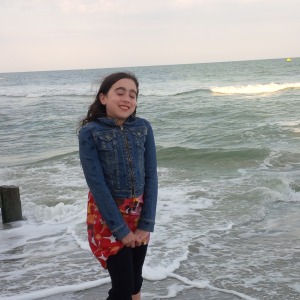 Well I guess she isn’t a baby anymore. We are entering tween territory. Hence the tears.

It is definitely hard to watch your kids grow up and it is hard to feel them pull away and assert their independence, but at the same time it is nice to see that we have raised such a wonderful girl.

A girl who would give her left arm for vanilla cake with chocolate frosting. She is definitely my daughter!

So as per her request I am making her favourite cake. Not going to lie I sometimes get lazy and use a boxed mix.

One thing I will NEVER skimp on is icing. Home made chocolate butter cream is the best. Nothing in a container can compare. 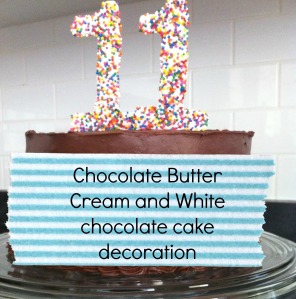 In your mixer cream your butter until it is smooth. Add in your cocoa and powdered sugar.

Add in the vanilla and milk

Make sure your butter and milk are not cold at all. If your butter is remotely cold you will have chunks of butter in your icing. That is just gross and not something anyone wants to eat.

If your milk is cold it will cause the icing to seize and not spread as easily.

That’s it. In just 3 minutes you can have the best chocolate frosting!

I love to decorate cakes and make them all fancy, but for Sofie’s cake I thought that plain and simple is the way to go.

After a crumb coat and 20 minutes in the fridge I added on the final icing layer.

A trick I learned on youtube is to smooth your icing with a ruler. Works like a charm!

It could not be easier

Print out a large number 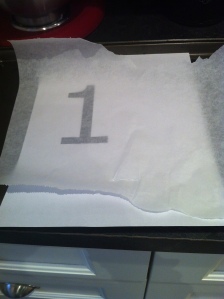 Add a little extra at the bottom for your toothpick 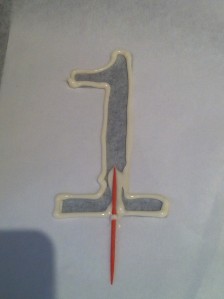 Fill in with the remaining chocolate

Cover with sprinkles and let harder for at least 15 minutes

Follow A place for you and me on WordPress.com